John Valadez, filmmaker and the director of the Documentary Film program at Michigan State University, has been making and engaged with film for over 25 years. In his expansive career as a long-form documentary filmmaker, Valadez has directed dozens of documentaries on the themes of race and color in America, covering topics such as music, politics, education, and history. 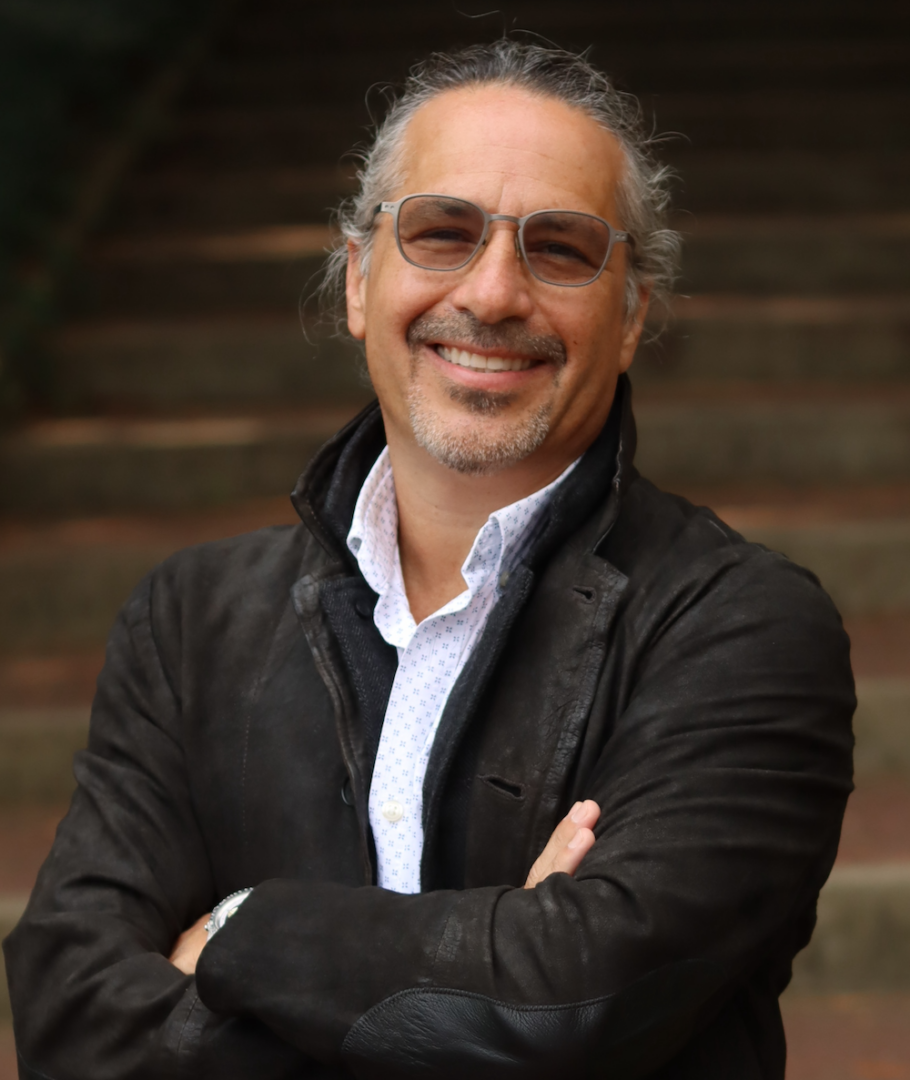 “You name it, I’ve done it,” explains Valadez.

In addition to his work in the field, Valadez recently earned his MFA in Film at VCFA, graduating in 2019. While attending VCFA, Valadez produced his thesis film, AMERICAN EXILE, under the guidance of faculty members Nina Davenport, Michel Negroponte, and Mike Day. In AMERICAN EXILE, Valadez and his team critically examine through human narratives the mass deportation of US veterans (a direct result of recent policy change in Washington). While producing AMERICAN EXILE, Valadez not only created the film, but helped to lead a congressional briefing on deported veterans, showed clips of his film to Washington lawmakers to raise awareness around the impact of these deportations on military veterans and their families, and collaborated with Elizabeth Warren and her staff on the film.

Once the issue had been brought to the table, it couldn’t be ignored, and on Friday, July 2, President Joseph Biden ordered the Department of Homeland Security (DHS) to develop a process to return deported veterans and their families back to the US.

In a recent interview, Valadez spoke to us more about AMERICAN EXILE, its impact, the need for more films like it, and his educational experiences at VCFA.

Q: Tell us a bit more about AMERICAN EXILE. What does the film center on and engage with? 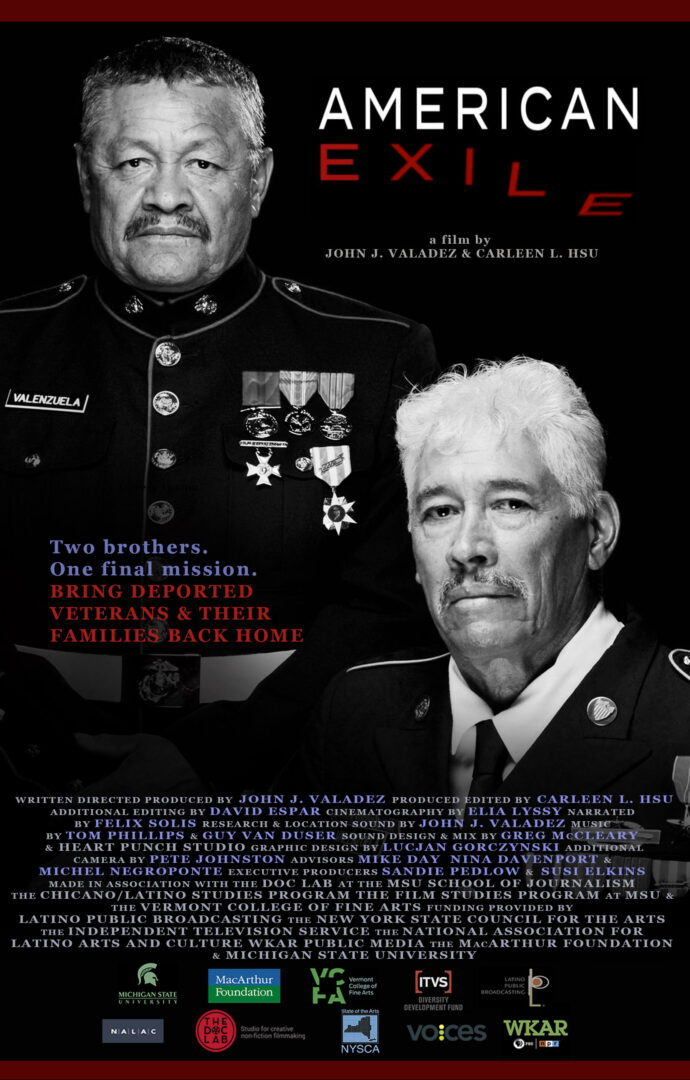 A:  AMERICAN EXILE is a story about two brothers who volunteered and fought in Vietnam. They both came home with distinguished records—bonafide war heroes. One of them received the Bronze Star. And now, 50 years later, after they’ve come back, they’ve been deported because of recent changes in national policy. They didn’t know what was going on, but they quickly found out that it wasn’t just them, that there are thousands, probably tens of thousands, of US military veterans who are kicked out of the country after they’ve completed their time in the military. The film is about these two very unlikely and reluctant activists who now don their uniform for one last mission, and that mission is to stop the deportation of US military veterans.

Q: Can you speak more on this issue and how some Americans might not even know that this is happening?

A: I’m Mexican American, I come from that community, and most of the people being deported are Latino, so I see that going on around me and in my community. I think for most Anglos, they don’t “see” that, because it’s not their uncle, it’s not their cousin, it’s not their neighbor.

When you grow up Mexican American, our community is disproportionately poor, disproportionately uneducated. The US military has always been a way in our community for us to move up the economic ladder. It’s always been a way to distinguish ourselves and demonstrate our fealty to this country and that we are American, because so many of the perceptions of Anglos are that we don’t belong. There is this idea that we don’t really belong. And that is kind of represented in a Latino veterans, who served with distinction and then are being deported after their services are done. You know, it’s another metaphor.

And so that’s one of the reasons why it’s something that’s underreported, because there aren’t that many reporters that work in the media in proportion to our numbers. For Anglos, about 30% have a college degree. For Mexican Americans, about 12% have a college degree. Anglos are about three times better educated than a Mexican American. And that’s one of the reasons why you don’t hear about stuff like this, because the people who are going to report on or explore those stories are going to be the people who see these things happening in their community.

Q: How can we better support these voices in the media?

A: Go to a place like VCFA. There you can get an advanced education, and we get mentorship from really talented and accomplished filmmakers who really know their stuff. You use VCFA and use getting your MFA as a way to work, and to explore your own creativity. The more there are African-American and Latino and Asian-American students who go to the program, then the more you’re going to add diverse voices who are well equipped to participate and compete in a media environment, because they’ve gotten excellent, excellent training. It’s one of the beautiful things about the school. In my case, that’s exactly what I did. You know, I had an idea for the film, and I used VCFA to improve the quality, scope, nuance, depth, and artistic acumen of my work.

Q: In your words, how can film—and especially films like AMERICAN EXILE—impact their viewers and even bring about change in our communities?

A: You don’t have to grab, you know, ten veterans and bring them to Washington, DC. What you can do is, through film, you can reveal to the viewer an emotional, intimate experience of being close to somebody and having empathy for them, and understanding their situation on a very human level. And it’s that emotional connection that really, I think, is the thing that really seals the deal.”

You can tell someone all kinds of facts and figures, but you’re probably going to forget them after an hour or two. But when you see a moving story, and you have a physical reaction to it—like it makes you tear up or it makes you laugh or it shocks you—your body has a physical reaction to the story that you’re hearing and seeing. Rather than your mind just thinking about it, you hold it in your body. And you remember that because there’s a physical association with the idea. You remember if something made you cry. Your body is going to remember how you felt. You’re going to carry that with you, and it’s going to affect you moving forward. And that’s what film can do, making people aware, and pushing them towards positive action.

AMERICAN EXILE will receive a primetime coast-to-coast broadcast on PBS as a national Veteran’s Day special on November 16, 2021.

Read more stories about our Alumnx through our Alumnx Success series. Interested in an MFA in Film? Visit our program page for more information on our VCFA graduate degrees.