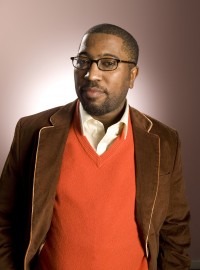 Major Jackson is the author of four collections of poetry: Roll Deep (W.W. Norton: 2015), Holding Company (W.W. Norton: 2010), Hoops (W.W. Norton: 2006), and Leaving Saturn (University of Georgia: 2002), which was awarded the Cave Canem Poetry Prize and was a finalist for the National Book Critics Circle Award in Poetry. He has published poems and essays in AGNI, American Poetry Review, Callaloo, Harvard Divinity Bulletin, The New Yorker, The New York Times Book Review, Paris Review, Poetry, Tin House, and other fine literary periodicals. His poetry has been included in Best American Poetry (2004, 2011, 2013, 2014) and Best of the Best American Poetry. He is the editor of Library of America’s Countee Cullen: Collected Poems. Major Jackson is a recipient of a Guggenheim Fellowship, National Endowment for the Arts fellowship, Pushcart Prize, a Whiting Writers’ Award, and has been honored by the Pew Fellowship in the Arts and the Witter Bynner Foundation in conjunction with the Library of Congress. He has served as a creative arts fellow at the Radcliffe Institute for Advanced Study at Harvard University and Fine Arts Work Center in Provincetown. He is a core faculty member of the Bennington Writing Seminars and the Richard A. Dennis Professor at University of Vermont. He serves as the Poetry Editor of the Harvard Review.

In Roll Deep, a breakthrough volume, Major Jackson appropriates the vernacular notion of “rolling deep” to capture the spirit of aesthetic travel that defines these forceful new poems and brazenly announces his steady accretion of literary and artistic influences, both formal and experimental—his “crew.” The confident and radiant poems in Roll Deep address a range of topics, most prominently human intimacy and war. And like his best work to date, these poems create new experiences with language owed to Jackson’s willingness to once again seek a rhythmic sound that expresses the unique realities of the twenty-first century with humor and understanding. Whether set in Nairobi, Madrid, or Greece, the poems are sensuously evocative and unapologetically with-it, in their effort to build community across borders of language and style.