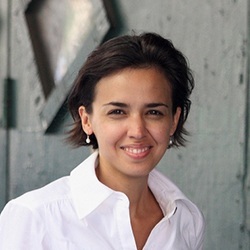 We recently interviewed current student Nadia Martinez on her choice to come to VCFA, and what her experience has been like in the Visual Art program so far. This is her journey.

Visual Art current student Nadia Martinez never thought she would get a masters. In fact, she never even thought a masters was the right path for her and her art.

“I remember being in art school in New York [as an undergrad] and some mentors saying ‘Oh MFAs! What they try to do is they try to make everything just so serious and it takes away from what is actually the essence of art….’ I remember being young and listening to those things and being like ‘Yeah, I make art just because I want to make art. I don’t want to get too complicated about it.’”

But on a fateful day in the spring of 2019, Martinez happened to see an ad on Facebook for VCFA that changed everything.

“I was like, hm, what is this? Multidisciplinary? That sounds like it would be it for me,” Martinez recalls. After clicking the ad and researching VCFA and its Visual Art program even further, Martinez started to feel even more connected to the college and the heart of the program. “Then I was like, ‘What, I only need to go twice a year? So that means I can keep working?’ I was like, ‘Wow, this sounds like the place for me.’ I just couldn’t believe it that something like that existed.”

On a whim, Martinez casually replied to the ad with her contact information and a few questions about whether or not the educational credits she received in her home in Honduras would transfer. Within 24 hours, she was on a call with Visual Art Program Director Thatiana Oliveira. After speaking with Oliveira about the residency model, advisors, and the ease of transferring credits, Martinez started to really picture herself studying at VCFA.

“And after that conversation I was like, ‘Wow, I can actually do this.’ I kept thinking, I never thought I actually wanted this, but now I do,” says Martinez. “I just applied to VCFA. I didn’t apply to any other school. I knew exactly this is the school I want to go to.” 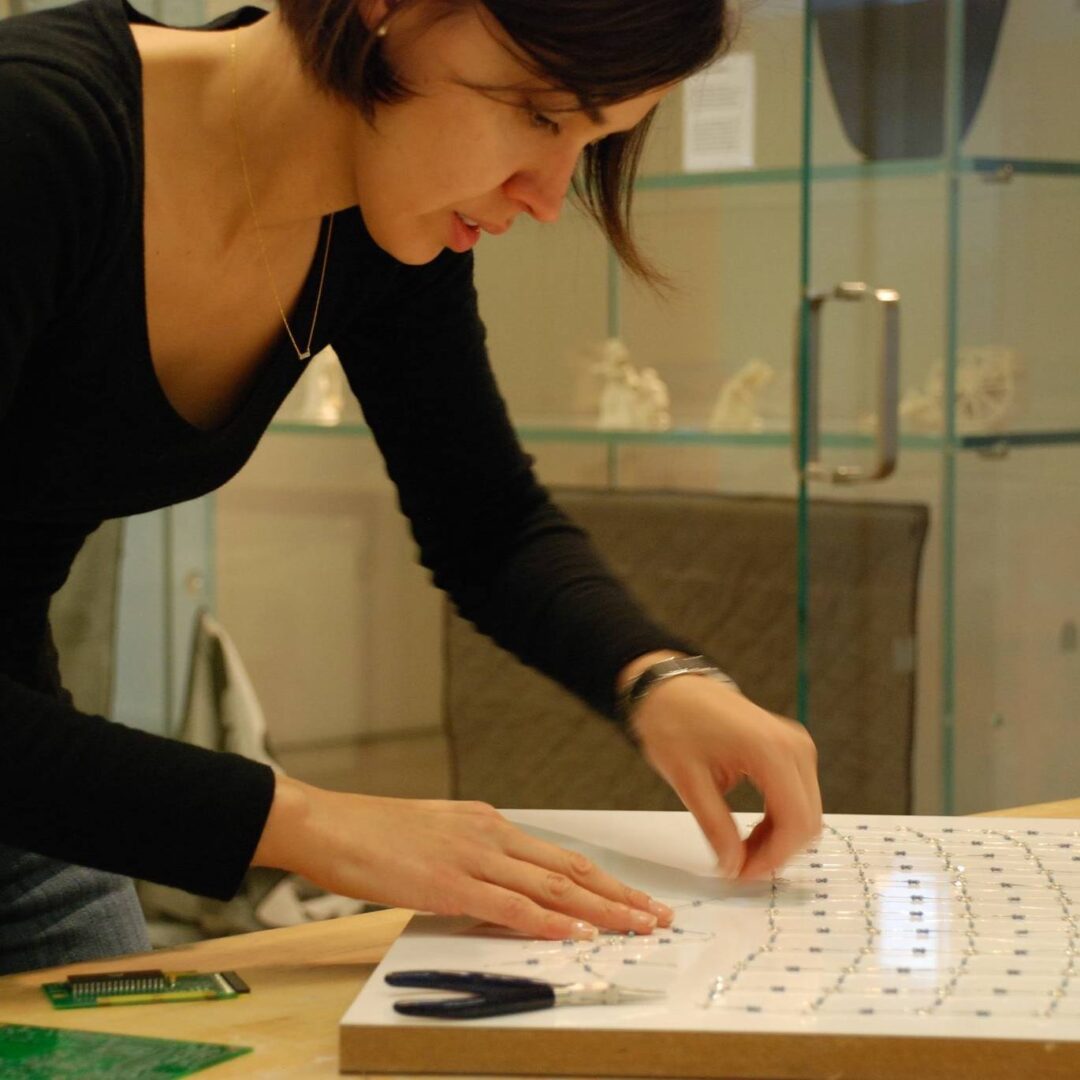 After making the jump she never expected to take, Martinez found an experience at VCFA that has been exploratory, vulnerable, and an opportunity to grow in her art.

As a long-time artist and teacher, Martinez mainly worked in sculpture and installation art before her time at VCFA. When the pandemic hit and VCFA had to move to a fully virtual model—including virtual residencies and exhibitions—Martinez was posed with a unique challenge.

“I do sculpture and installations, and translating that and putting it online and in a photograph? It just doesn’t translate well,” says Martinez. “So I said, ‘Well, I guess this is the right time for me to try a new medium, which is video.’ I was like, ‘Okay, I’m going to see what happens.’”

Not only did Martinez change her medium, she had to change the way she approached her art making.

“My work has always been a reflection of what has been going on outside. So almost like a commentary. [This time] is actually such a hard year to do because things have been changing so quickly. I’ve been very shaken up,” says Martinez.

“It has really been an adventure, because at first with the subject matter, I was not so sure about it because I don’t like to be in front of the camera… and then I ended up putting myself in front of the camera,” Martinez laughs. “And it has been such a vulnerable time. But it is very exciting because I am discovering new things about myself.”

Martinez noted that most artists—like herself—tap into their personal experiences and become vulnerable through their art, but Martinez found she was especially digging in deep with the new art she was creating at VCFA. In a word, she explained that the time has been “powerful,” and that “I am daring a little bit more to do things that I wouldn’t have done before.” 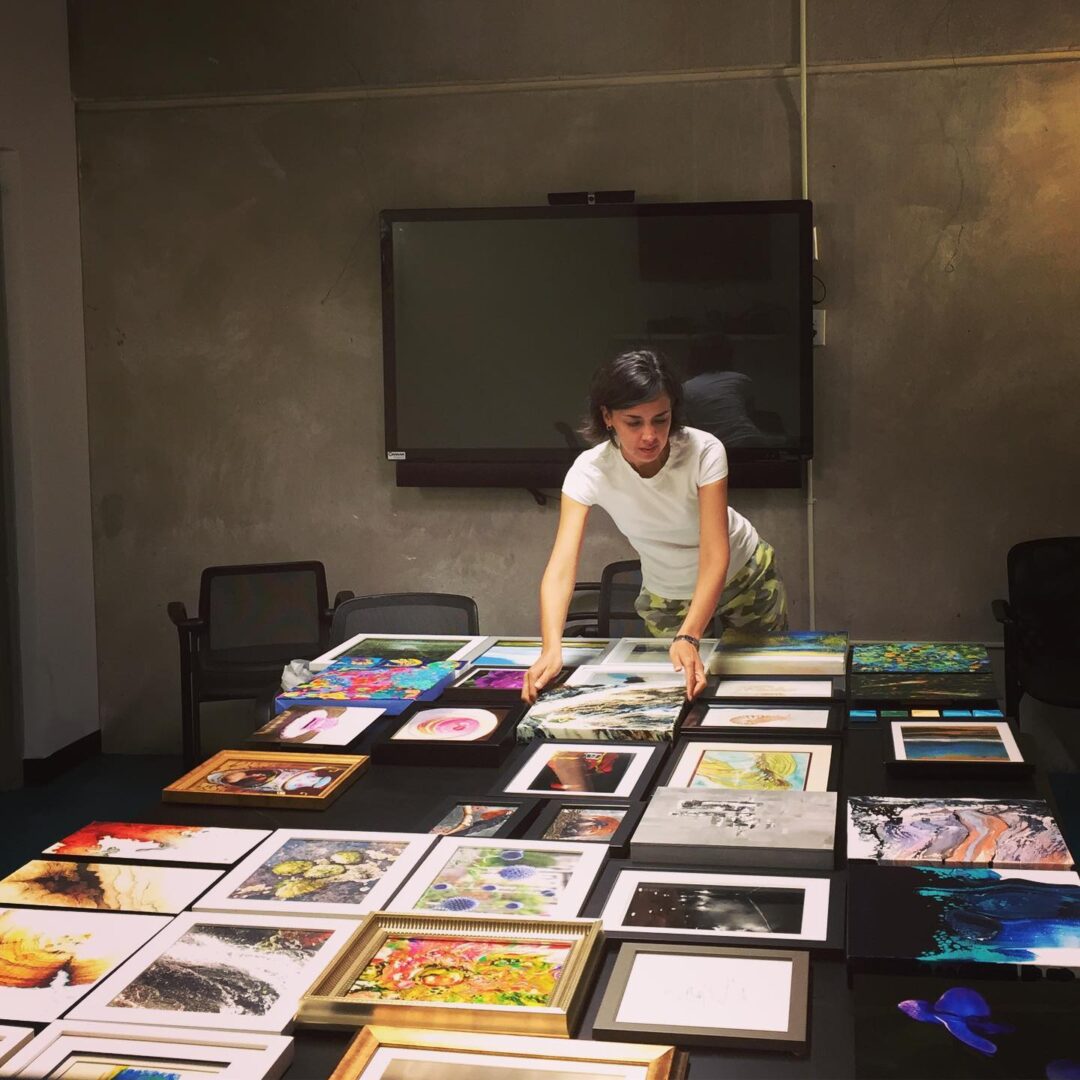 In her most recent semester at VCFA, Martinez explored the act of art making itself and her relationship with it through using an unusual—and new—material.

“The whole semester, my medium has been this,” Martinez says, holding up a single white cotton ball. “I have been making threads out of it, then I make videos of me threading it. So the first one was with my hands, and looking at that relationship between the hand, the labor, and how do we actually do that with a screen, which has been this whole reflection on how we disconnect the hand when we are doing virtual things.”

Before coming to VCFA, Martinez certainly never thought she’d be making threads out of cotton balls, but as she found, a lot can change in a year. From clicking on that ad to sitting in front of the camera, VCFA did not “take away the essence of art” as her old professors once said, but instead offered a look at the essence of art making itself.

“[At VCFA] I’m growing in a very different way, which is very surprising to me and to people that know me,” Martinez says. “I have one friend who sees what I am doing and she says, ‘Nadia, I don’t recognize you.’ Me neither, but I actually kind of like it.”

Click here to view one of Martinez’s videos from her time at VCFA.

Read more stories about our Alumnx through our Alumnx Success series. Interested in an MFA in Visual Art? Visit our program page for more information on our VCFA graduate degrees.