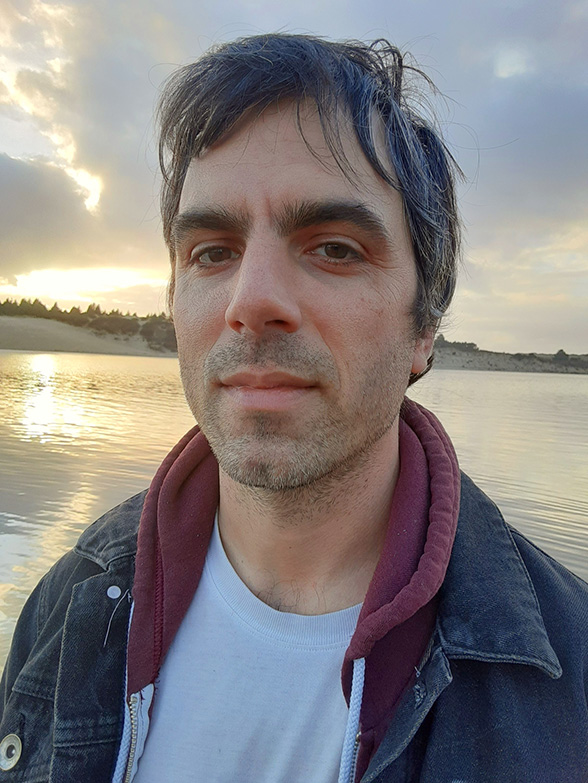 Current Music Composition student John Paul Labno has been involved with music one way or another ever since childhood. Today, John Paul is well known at VCFA for his cross-disciplinary collaborations with multiple members of our community. Through his work, music becomes a form of expression and connection.

John Paul Labno participated in an e-interview with us in December of 2020. Below are edited excerpts from our conversations about music, artistic collaboration, and studying at VCFA.

ON THE PRESENCE OF MUSIC IN HIS LIFE

I was raised in a musical family and began playing myself from a young age. As a teenager, I started writing music and have since spent the last 25 years engaged in some kind of musical activity or another. I have toured extensively, released several studio albums, scored films, created installations, produced records, etc. Currently, I am most interested in composing concert music and intermedia collaboration.

I think that music helps us through life in innumerable ways—it connects us to others, it puts us in the present moment, grounds us in our bodies, helps us process our feelings, it uplifts and entertains, it calms, and can also provide opportunities for healing, reflection, and possibly even transcendent experiences.

Sara Barger’s film, Little but Fierce, is a portrait of a young girl named Madison and her family. It is a story about love, family, cancer, and cannabis. I received an email from [Music Composition Program Director] Carol Beatty saying that Sara was looking for someone to score her film. I reached out to Sara and sent her links to some of my work that I felt most relevant and found myself beginning to score her film within a week. The process was relatively quick. I made MIDI mockups of each cue and sent them over to Sara for her feedback. Once we were happy with how everything was feeling, I made parts and sent them to the cellist and flautist who made recordings and sent them back to me within a week. The score was very simple and intimate—just flute, cello, and piano (which I played)—so I was able to mix all of the audio in a couple days. I think the whole process was just under a month.

ON THE IMPORTANCE OF ARTISTIC COLLABORATION

I have actually collaborated with four VCFA artists by now. I worked on Sara Barger’s film Little but Fierce, collaborated with Oscar Suh Rodriguez on a remix for his band June Pageant, played piano on a song for Jaquay Smith, and have recently started a band with my wife, Sasha Evangelista, who is an incoming student in the creative writing program.

I think art often benefits from the inclusion of multiple perspectives and can deepen as each person contributes something unique, personal, and valuable to a project. I love collaborating on interdisciplinary projects because there can be such synergy, combining not just multiple viewpoints, but multiple modes of perception and ways of being. I think that art can be magical and can have the ability to alter consciousness. Different mediums can engage different aspects of our being, and intermedia collaboration can create opportunities for a deeper, richer experience.

ON HIS RECENT PROJECTS

I am always most excited about what is happening now or what is just about to happen. The piece I am most excited about right now is “Wildwood,” a piece written for string trio that debuts during the winter residency in February 2021. Other recent work that I am proud of includes my album, bells, the score to Little but Fierce, Fool’s Fire which I performed at the last VCFA residency with Roger Zahab, and my new band with my wife, called heathen honey.

ON THE IMPACT OF VCFA

VCFA has been wonderful for me because it has allowed me to focus entirely on my creative practice in a way that a more traditional graduate school could not. In one year I have been able to overcome many technical hurdles, refine my process, and create truly meaningful work that will serve as a stepping stone for all that is to come. The relationships that I have formed with faculty and my peers are surprisingly strong and deep. I feel that the VCFA community will continue to be a source of support for years to come.

Read more stories about our alumnx through our Alumnx Success series. Interested in an MFA in Music Composition? Visit our program page for more information on our VCFA graduate degrees.