Donna Bowman Bratton’s picture book, King of the Tightrope: When the Great Blondin Ruled Niagara, was published by Peachtree on October 1, 2019.

Jean-François Gravelet was a French tightrope-walking prodigy who grew up on the rope and became famous as a child. But routine performances became too dull, too boring, too ordinaire. Not even fame was enough to satisfy his artistic yearnings. He imagined more dramatic and exciting feats that nobody had ever done. It took a fateful trip to Niagara Falls in 1858 to spark his most creative idea—to perform on a tightrope over the raging Niagara River. But how could he engineer a massive rope across the 1100′-wide river, keep it from snapping, and keep himself from plunging into the deathly current? The Great Blondin needed an engineering process, determination, and a belief that what he could imagine, he could accomplish. Magnifique! 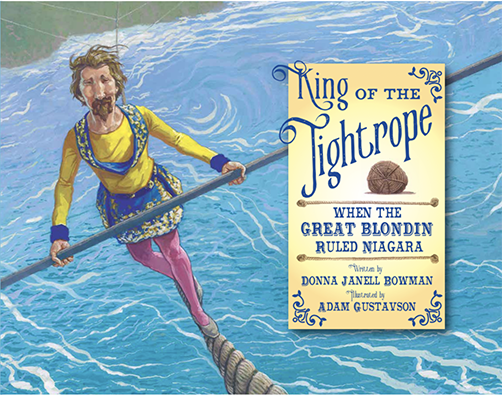