VCFA alumnx Dana Walrath has received a Creation Grant from the Vermont Arts Council to support the opera adaptation of her 2016 graphic memoir, Aliceheimer’s. An impactful and true story of Walrath’s journey with her mother and the dementia that moved in with them, Aliceheimer’s is a piece that transcends genre. In this interview, Walrath talks with VCFA about receiving her Creation Grant and her hopes for the music-based interpretation of a work so close to her heart.

ON HER VERMONT CREATION GRANT 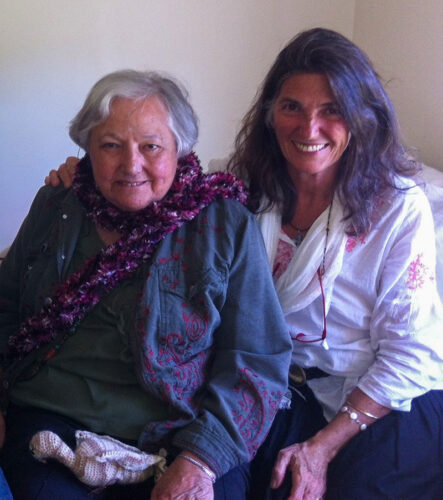 This Creation Grant is to support the completion of the full libretto for a single-singer opera based on Aliceheimer’s (2016), my graphic memoir about my mother Alice’s dementia journey. When Vermont composer Erik Nielsen approached me about turning my book into an opera, I had to say yes. Alice loved opera. As a daughter of genocide who started life in a NYC tenement, opera was one of her vehicles into the American Dream.

Aliceheimer’s started as a short comic written to celebrate the healing and laughter we found during the years when Alice and dementia lived with me in Underhill, Vermont. I found the voice for the comic the day I cut up bits of Alice in Wonderland, to make Alice’s clothing, as this book captured the way we lived dementia: We treated it as an adventure, one that was scary at times, but if we went with the flow—the “yes and” approach of improv comedy—we could find magic there as young Alice did in Wonderland. I narrate both Aliceheimer’s and its sequel, Between Alice and the Eagle, a work I have in progress right now. The opera, on the other hand, showcases Alice’s voice and the inner thoughts that she made manifest throughout this entire journey. The ability of music to ignite people living with dementia, even as they lose their words, makes opera a powerful form for expressing the internal life of someone living with this disease.

While writing a libretto is a new form for me, it feels like a natural extension of my work and life.

ON HOW THE CREATION GRANT BENEFITS HER ART

The Creation Grant literally gives me time to create, and an income to support me as I do this work. I left paid work as a professor of anthropology to care for Alice and was fortunate enough to do so with her blessing. Before dementia, I had done all my writing and art during stolen hours—early morning, late at night, on the rare retreat or residency. Early in 2008, shortly after Alice and dementia moved in with me, she said with the clarity that dementia brought to our lives, “You should quit your job and make art full time.”

By supporting the Aliceheimer’s libretto, the Creation Grant also contributes to actualize the ultimate production and performance of the opera down the line. It demonstrates a belief in the project and will play a role in future funding. Doug Anderson and the Opera Company of Middlebury have already expressed interest in hosting the first workshop production of a few scenes at Town Hall Theater in Middlebury after the libretto and the score are complete.

ON HER HOPES FOR THE IMPACT OF ALICEHEIMER’S

I hope that Aliceheimer’s will change the dominant narrative about dementia to bring both hope and respite to people living with this disease. The classic medical formulation focuses only on the heartbreaking loss which reinforces the fear and stigma that surround it. Laughter is respite, and it opens up new ways to cope. I regularly hear from people who have just received a diagnosis or who are in the midst of caring for a loved one that this book restored a sense of hope and gave them a new way into living and thinking about their lives with dementia. I hope Aliceheimer’s will open conversations about care work and the people who do it, both the essential workers doing this vital work for low pay and family members who must give up other paid work in order to care for their loved ones. 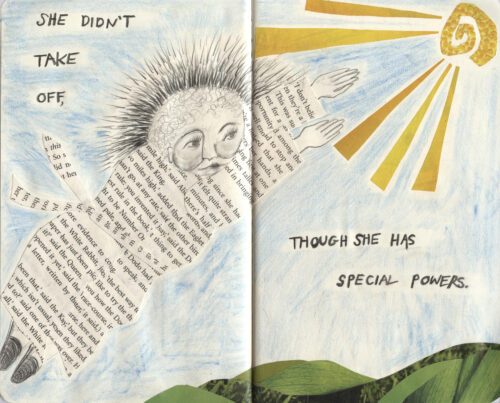 Finally, I hope that Aliceheimer’s will change the way we pattern death by talking about it openly, by showing that it is a natural and I dare say even a beautiful part of life when it happens without violence. The story of accompanying Alice through her death in November of 2017 in a Vermont care home balances the medical focus on preventing death with finding comforting ways to embrace this natural process.

A fair, just, and healthy world requires that we look at death collectively to be sure that all people have the right to live and breathe. Telling Alice’s dementia story all the way through to her death allows me to explore multiple facets of trauma, of systemic racism, of global labor flows, and of the power of the human imagination.

ON THE IMPACT OF VCFA

I discovered comics while at VCFA and fell in love. Alice lived with me the entire time I was pursuing the MFA so we fell in love with comics together. Watching her eat up every comic that came into the house—from Maus, to Fun Home, to American Born Chinese, to the wordless Robot Dreams—made me sure I wanted to use comics for telling our story. My graduate lecture on Graphic Narratives led directly to making my first Aliceheimer’s comic and to other opportunities at VCFA, such as serving as faculty on the Interdisciplinary Workshop created to bring people from all programs together. The first time I shared Aliceheimer’s publicly was when I returned to VCFA as a Graduate Assistant to Laura Kvasnosky for the first visual/verbal hands-on residency workshop. But above all, VCFA supported me to think and live and be outside the box.

During my first residency, Martine Leavitt gave a talk about giving yourself permission to be a writer, affirming this with simple actions such as putting it down on forms. Without VCFA, I may well have returned to academia fully when my mother transitioned to memory care. Instead, VCFA let me create the identity, the life work that I had only dreamed of before. I am filled with gratitude that this is the work that I get to do. Especially now, as we imagine a (k)new world in the face of the pandemic and the surfacing of the systemic anti-Black and Brown racism that permeates our world order, I believe the arts are more vital than ever. The arts let us reconnect with the deep knowledge inside of each of us that will tip this earth back into balance and restore justice.

Since the publication of this profile, Aliceheimer’s (2016) has successfully been transformed and translated into a single-singer opera. From the press release:

“On November 6 and 7, 2021, two preview showcase performances of Aliceheimer’s, the new chamber opera by composer Erik Nielsen and artist, writer, and anthropologist Dana Walrath, will take place at Bethany Church in Montpelier and Town Hall Theater in Middlebury. The opera will feature soprano Mary Bonhag as Alice, accompanied by pianist Alison Cerutti.”

Full production is anticipated for 2022 or 2023. Stay in touch with Walrath and the project at www.danawalrath.com.

Read more stories about our alumnx through our Alumnx Success series. Interested in an MFA in Writing for Children & Young Adults? Visit our program page for more information on our VCFA graduate degrees.