Corey Pickett is Director/Founder of The Jaye Rock Cultural Center and received the Internal International Sculpture Center Award in 2017. He was Santa Fe Art Institute artist in residence in their “Truth & Reconciliation” Residency, 2018/19

Corey Pickett sat down with the staff of VCFA’s alumni magazine, in residence, to discuss his creative process and his acclaimed body of work.

An interview with Corey Pickett from in residence 2018 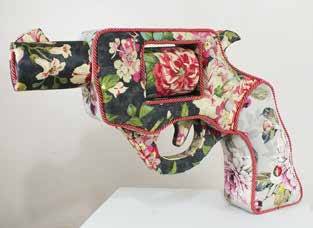 If there’s a theme to COREY PICKETT’S wide-ranging and striking artwork, it’s ingenuity. Pickett approaches current and historical social issues with a fantastical eye, all while using everyday items that most artists wouldn’t consider.

A native of Georgia, Pickett is a veteran of the US Air Force and now lives in Clovis, New Mexico with his wife and four children. He graduated from Eastern New Mexico University in 2000 and completed his MFA in Visual Art from VCFA in 2017. Here, Pickett discusses how ideas come to him and his unique approach to the creative process.

Q: LET’S START AT THE BEGINNING OF YOUR CREATIVE PROCESS. WHERE DO YOUR IDEAS COME FROM? HOW DO THOSE IDEAS TURN INTO YOUR ART?

A: My ideas come from living, from books, movies, experiences. Whatever captivates me, which is a lot. For some reason, I’ve had a fascination with slavery. That part of our American history. We have these remnants of the past and slavery where I grew up on the coast of Georgia. It’s something that’s everywhere and a part of everyone that was born there. Also, ideas come from social issues. Issues that deal with being a human being. Some of it has to do with being an African American, but often as I’m going through my research, it becomes humanitarian work. These social issues affect everybody. And so I try to create work that deals with today’s social issues as a humanitarian issue. I find objects or materials that I think reflects that.

Q: YOU WORK WITH SOME INTERESTING MEDIUMS AS AN ARTIST. FOR INSTANCE, YOU’VE WORKED WITH CARDBOARD AND CREATED MURALS OF AFRICAN AMERICAN FIGURES LIKE MUHAMMAD ALI AND ISAAC HAYES. HOW DID THAT COME ABOUT?

A: I used to be a painter, but I wasn’t bringing anything new to that, and so I kind of made a change over time. I like using my hands and working that way. It feels much more real to me. So I started with cardboard, all kinds of cardboard. And there’s cardboard everywhere, and it comes in all colors. So I created this work using different cardboard colors—I never painted the cardboard. I could find cardboard everywhere. It’s real easy. You know, just go right into the dumpster and take it out. In everything I’ve done, you just find what you can find. Living here in Clovis, I use whatever’s in abundance, whatever’s right here. It turns out there’s a lot of fabric in Clovis, along with cardboard.

Q: YOU’VE FEATURED FABRICS AND MATERIALS IN MUCH OF YOUR WORK, INCLUDING SOME MEMORABLE MFA IN VISUAL ART EXHIBITIONS WHILE YOU WERE A STUDENT AT VCFA. WHY FABRICS?

A: I never thought I would work with fabric at all, but it just sort of happened. You know, I like the hands-on feel. I started by finding purses at the Goodwill here in Clovis and dissecting those. Purses have interesting patterns and Goodwill always has a ton of purses for some reason. I didn’t want to spend a lot on materials, and I could buy a lot of these purses for very little. Who knows what they thought when they saw me walk through the door looking to buy all these purses?I started making padlocks out of the fabrics. The padlocks having to do with slavery. I found fabrics and designs that I felt reached back to the Antebellum period. Lots of African designs that reflected that period and that I would turn into padlocks. Later, I started creating guns, like the older Colt revolvers. And those ideas just took off. A lot of people think I sew everything together. I don’t. I stretch it, I staple it, I use a glue gun. 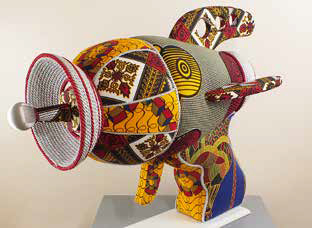 Q: YOUR GUN DESIGNS ARE VERY COLORFUL AND VERY RETRO SCIENCE FICTION, HEARKENING BACK TO THE RAY GUNS OF 1950S SCI-FI FILMS AND TV SHOWS. WAS THAT INTENTIONAL?

A: I’m a big sci-fi fan. Always have been. I’ll watch Star Trek episode after Star Trek episode while I’m working. Some people listen to music, I put on Star Trek. I never thought to connect my sci-fi love with my art. Former faculty Cauleen Smith was the one to make that connection and suggest it. I started making these large guns with the 1950s, 1960s sci-fi look, which was a lot of fun to research. But I was also making these guns with African designs, lots of bright colors. Sci-fi guns that look like they belong to a different future than what we’re always presented on TV and in movies. An Afrofuturism. I was looking at the relationship of African Americans with science fiction.

Q: YOU’VE RECENTLY STARTED WORKING WITH A COMPLETELY DIFFERENT MEDIUM FROM FABRICS—FILM. HOW DID YOU MAKE THAT JUMP?

A: It was something I was thinking about for a while and I was pushed to try it at VCFA by Viêt Lê. It was for my graduate thesis actually. It was video project that dealt with gun violence. It was a video collage, taking images and film clips to create this project. For the most part, I used images and films that were already out there. I used a crow throughout the film as a metaphor for the black person. I used that blackbird imagery from Dumbo and worked that into these images of gun violence to tell the story. It worked out a lot better than I thought it would. Based on this experience, I want to do more. I’m looking into joining the guild for filmmakers in New Mexico. 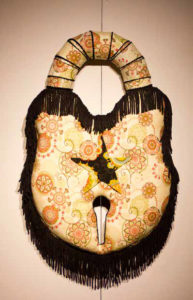 A: I’ll be featured in a few exhibitions, like in Houston and Santa Fe. I’ve done quite a number of exhibitions in Santa Fe, and I’ve connected with a lot of artists there. One Chicago artist is featuring me in an exhibition in Chicago this December and in Philly next year. I’m also developing new works and installations that deal with the gun violence issue. I’m working on this idea about a clock that coordinates with gun violence stats, so every time the clock moves forward in time, it’ll click with the sound of a gunshot. And I’ve got other ideas, like creating a Monopoly-type game where players try to buy houses and stuff, but they never have enough money. Just to show how difficult it is to get ahead when you have very little to begin with. There’s a lot coming up for me. It’s good to be busy.