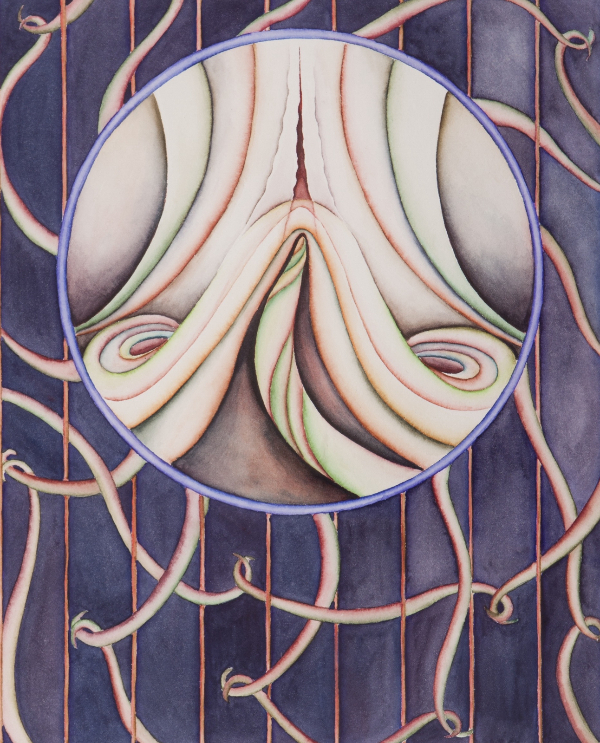 Faith Wilding is a multi-disciplinary artist whose work addresses aspects of the somatic, psychic, and sociopolitical history of the body. While best known for her works Waiting and the Crocheted Environment (Womb Room), first displayed at the legendary Womanhouse in 1972 – the considered implementation of materials in Imago Femina serves to reinforce these ideals, and provides an excellent opportunity to appreciate some of the lesser-known 2-D works of a legendary artist.

Imago Femina: A new language of “female forms” or perhaps the rebirth of a language of “becoming,” of metamorphosis, of shapes, of possibility. Wilding’s inspiration for the Imago Femina series was instigated by her research into early medieval herbals, bestiaries, alchemical manuscripts and Books of Hours of the Virgin. Imago hovers between pagan and Christian, metaphysical and materialized, between botanical depiction and visionary iconology.

“I’m sitting in the British Museum Manuscript Room, making drawings from an 11th century Herbal, hand-drawn on lambskin or calfskin vellum. These are the “healing herbs” sacralized with gold leaf borders, flaming in red, blue, green, and gold—nature transformed by the alchemy of art. And here, in this illuminated book of Hours of the Virgin, I note how the intricate borders are inscribed within shapes suggesting Her uterus, heart, breasts and senses. Imago Femina: lushness, fullness of growth, thick leaves and vines, entangled flowers, pink-tipped buds bursting with sticky sap against a royal blue ground. The plants metamorphose into dragons, snakes, flames, piercing spears. Bees fecundate the centers of flowers. Did the herbalist painters see the world that way? Did the spirit sense the vital life of cells long before science discovered them? All life is emerging, penetrating the heart.”— From Faith Wilding’s notebooks while making Imago Femina, 1978.

Says Wilding (from an interview with Beth Capper in 2014): “The topics between this work and my other work are very close in a way. I have always been very interested in gender, sexuality, the female body, depictions of the female body, nature and natural forms … The kind of abstraction I use is so pleasurable, and I always say that I use beauty as a terrorist tactic­­­ – as a sneak attack on someone so that they’ll look on it before they realize what it actually is. Like, a really twisted embryo that looks beautiful as I’m approaching it but then it’s dealing with assisted reproductive technologies and stuff like that. It’s like the surrealist idea that beauty must become convulsive or it must not be at all.”

Faith Wilding received her MFA at CalArts in 1973, where she was a founding member of the Feminist Art Program. Her work has been exhibited extensively over the last five decades including the seminal survey WACK! Art and the Feminist Revolution, organized by Cornelia Butler, which traveled from the Museum of Contemporary Art (Los Angeles) to the National Museum of Women (Washington DC), PS1 Contemporary Art Center (Long Island), and the Vancouver Art Gallery. Additionally, Wilding’s work has been exhibited at Reina Sofia Museum (Madrid); Centre for Contemporary Art (Glasgow); Bronx Museum of Art (New York); The Whitney Museum of American Art (New York); the Armand Hammer Museum (Los Angeles); The Drawing Center (New York); Documenta X (Kassel); the Singapore Art Museum. Publications include By Our Own Hands: The History of the Women Artists Movement in Southern California, 1970-76 (Double X, 1977) and Domain Errors! Cyberfeminist Practices! (Autonomedia, 2003). Wilding was awarded a Guggenheim Fellowship in 2009 and has been the recipient of two individual media grants from the National Endowment for the Arts. In 2014, she was awarded the prestigious Women’s Caucus for Art Lifetime Achievement Award. Most recently, her work was included in Fiber: Sculpture1960 to Present exhibition that originated at the ICA in Boston.

Her traveling retrospective, Fearful Symmetries, will open at the Armory Center for the Arts, Pasadena, on September 26, 2015. An illustrated book, Convulsive Beauty: Faith Wilding’s Fearful Symmetries (1969-2015) about Wilding’s individual and collaborative work is in production, with publication expected in Fall 2016. Published by Intellect Books, UK, contributors include Amelia Jones, Irina Aristarkhova, Jenni Sorkin, Mario Ontiveros, Elizabeth Hess, Daniel Tucker, Faith Wilding, and Shannon Stratton (Editor). Currently, Wilding is Professor Emeritus of Performance at SAIC; a Visiting Scholar at the Pembroke Center for Feminist Research at Brown University, Providence, RI; and a faculty member for the MFA in Visual Art Program at Vermont College of Fine Arts. Imago Femina will be her first exhibition with LOUDHAILER.